Below are my thoughts on Katherine Ervasti’s questions about the environment and the travel industry.

Why do you believe changes in the environment will influence the international Travel Industry?

I think the industry is already being impacted. Many companies are choosing more environmentally friendly materials and processes, which in some cases costs more money. If you look at it from purely a bottom line perspective, why would a company buy more expensive light bulbs if they didn’t have to? There is certainly pressure from the media, society, guests and employees to make these changes, which means it is no longer just a “bottom line” issue. Now it is a question of, “what’s the right thing to do?” With this mindset, we will see more and more companies taking steps to ensure that they are meeting the needs of their employees and guests, as well as the planet. With the increased costs, companies will have to weigh the pros and cons of “going green” and the financial impact of those actions. Like any other business decision, the question after “what’s the right things to do?” is “does this make sense?”. If you can’t pay the power bill, it doesn’t matter what kind of light bulbs you have.

How do you think the industry should adapt?

I think we all (tourism industry included) should find what makes sense for us. At a theme park, does it make sense to collect plastic bottles separately from other trash? We can all probably agree in theory that it’s the right thing to do. But what about needing separate containers and the cost and time of two collections? How much is disposal and what if regular trash gets into the recycle containers and visa versa. Is it worth paying someone to separate it? Thinking about all that now we can ask ourselves, does this make sense? In general, I would say that the industry adapts the way the people within the industry adapt. This means it starts small. Think of your particular work area. Do you use a Styrofoam cup when you could use a mug? Do you print on both sides of the paper? It’s small habits like this that get us to think more globally.

Katherine Ervasti from Niagra College emailed me the other day with some interesting questions about environmental awareness and the tourism industry.  They were:

Why do you believe changes in the environment will influence the international travel industry?

How do you think the industry should adapt?

Two great questions that certainly made me think.  I will be sharing my thoughts in an upcoming post, but in the meantime, Katherine graciously agreed to let me share her thoughts with all of you.

Katherine and I would love to hear how you would answer those questions as well.  Fire away!

“I believe that the changes in the environment will greatly influence the international travel industry. The public sector looks at tourism development from the sustainability side also implies considering tourism as a long term
investment: resources have to be kept because they are the only ones available; once used the lifespan of the destination is over. (Xavier Font &Tor E. Ahjem) Many destinations and attractions are realizing that they and their customers leave a carbon footprint and as this footprint deepens we may eventually lose ourselves in it. Companies are starting to adapt to be more sustainable so that not only the destination will last longer but also there is a better ROI in the end. [T]his means that only those destinations that adapt their products to what tourists want will survive. Destinations are always catering to the needs of their visitors. Today’s travelers want to offset their carbon output, they want to stop global warming, and they want their grand children to be able to see glaciers and the Arctic. In the last lines of  “An Inconvenient Truth” Al Gore says, “Future generations may well have occasion to ask themselves, “What were our parents thinking? Why didn’t they wake up when they had a chance?” We have to hear that question from them, now. Consumers are more aware of the environmental concerns and are starting to see the climb in global warming, it is becoming tangible and it may be getting too late. The way we travel on an international scale will have to change to meet the needs of not only the consumers, but the Earth as well. There needs to be a way that we can travel internationally with less pollution, less waste waters, and with less harm to the environment. Traveling is about seeing the beauty of the world and we, as an industry, must try to preserve its nature for everyone to see.”

Thanks, Katherine, for sharing your thoughts!

Our flight was canceled.  Okay, so it wasn’t so funny at the time.  In fact it was downright frustrating.  But it happened.

Let me set the stage:

March 22, 6:00 am.  My wife and I are dropped of at Orlando International  Airport expecting to check in for our flight to L.A., then our connecting flight to Kona, Hawaii.  The airport is super busy and we decide to use curbside check-in.  The agent behind the counter looks befuddled as he looks at our tickets, then back at the computer screen, then back at the tickets again.  He tells us that it is too early to check in, because the flight is not scheduled to leave until the next day.  The next day?!?!?  That will not do.

We then go inside and are escorted to the counter to a very nice Delta agent who explains our situation to another Delta agent, who then gets on the phone.  Apparently our flight from L.A. to Kona had been canceled, and we were now indeed scheduled to leave the next day.  To make a long story short, the Delta agent who now held our tickets (and our chances of not missing a day in Hawaii) worked a miracle and got us on another flight THAT DAY on another airline.  We were now going to arrive 4 hours later than scheduled, but that was certainly better than 24 hours later like we thought.

My real point for telling you this story is about what happened next.  I felt completely compelled to tell everyone I ran into about this wonderful, helpful agent who worked her magic to get us to Hawaii.  Of course we thanked and probably over-thanked her in person, we thanked and told the other agent that helped us,  we told the boarding agent, the pilot we happened to sit next to, countless people in Hawaii and now all of you!

Each one of you probably has a similar story from your past that you can recall that made you feel the same way.  You may still be telling people about it!  Working in this industry, we also get to be the ones on the other side of this story – the ones who save someone’s day, and possibly their entire vacation.

Ironically, you may never know that someone is talking about you.  But everyone else will. 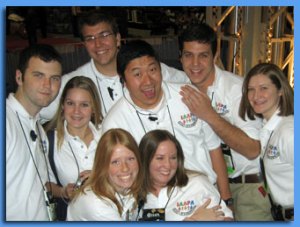 becoming an  Ambassador for the IAAPA conference.  I told him about the great Ambassadors I had the pleasure of working with, and what I saw as the keys to success in that role.  (A passion for the industry, great organizational skills and an ability to interact with a wide variety of people.)

What I thought would be REALLY cool, is if some of you former Ambassadors could share your experiences around the application process (how to stand out and be selected), the show itself, and some lessons that you learned along the way.  Who better to hear it from than the people who went through it themselves!?!

Feel free to leave a comment with your thoughts, or you can email Matt directly.