The other night my band played a show at a local watering hole here in Orlando. As we were pulling into the parking lot, a large semi tractor trailer was pulling in at the same time. I jokingly said to my guitar player, “look, our gear has arrived.” We can actually fit all of our equipment into two cars (and we are nowhere near being able to quit our day jobs) but it’s fun to dream!

His response was, “must be nice to have all that gear!” While I certainly agree that having a truck ful 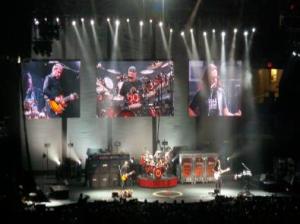 l of musical toys would be fun to play with, I was instead reminded how often I hear the phrase “must be nice”, and what it typically means.

To me, this phrase comes with the implication (amplified by the tone in which it is said) that having all that gear, the nice car, the summer home, or whatever, somehow makes life perfect.  In addition, it also implies that the person saying it could never have that perfect of a life, because they are not in a position to afford or acquire said car, boat, house, drum kit, etc.

What I think really bothers me about this phrase is the idea (and it could just be my perception) that the person with the car, house, boat or drum kit didn’t have to work or struggle in any way to earn or deserve it.  Unless someone has won the lottery, this just isn’t the case.  (Even then, they did have to buy the ticket!)

To me it comes down to a matter of perception… when you see someone successful, do you think about how you can learn from them and create your own success?  Or, do you tend to find faults with them and wonder what lucky star they were born under and why you couldn’t  have been so lucky?

Both perceptions lead to actions, but both do not move you forward.  I bet you can guess which one is which.

If you have had any sort of success in your life, you know that it is “nice”.  But it also took a lot of hard work.  Congratulations!

Last week I got an email from Ben Santos-Rogers from Funtown Splashtown USA in Maine, and he was telling me how his season was going so far.  Despite some wet weather and a soft economy, he was pleased with the progress being made in arena of team member morale, development and recognition.  He spent some dedicated time over the winter developing a number of new programs that he was now implementing.  He was excited to see the hard work paying off.

I also heard from my friend Matt Eckert of Holiday World in Indiana, who said that his season is going better than expected.  He attributes this to people staying closer to home this summer, rather than heading off to other distant (and expensive) locations.

So how is business for you this summer?  I’d love to hear about how things are going… what’s working, what could be better, and what has surprised you so far about the summer of ’09?

Looking forward to hearing from you! (click here to send an email)

As my wife and I were putting together the details of our wedding 5 years ago, we both realized that we were much better at preparing than we were at planning.  We both thought we could plan, but realized we were really just preparing.  It took us a while to figure out the difference.

To plan is to think about what you want to do and decide on a course of action.  Preparing is taking action to be ready for something.  So, as we talked about our wedding, we had to plan the ceremony, the reception, the rehearsal dinner, etc.  Once those details were worked out, we could then prepare for the day by sending invitations, securing the location, and lining up the Justice of the Peace.  Planning is thinking and deciding.  Preparing is doing.

This may sound elementary, but it was a big ’AHA’ moment for us at the time, and we continually refer to this fact when we think about things we want to do in the future. Knowing that planning doesn’t come naturally to either of us allows us to focus more energy on it.   As with any skill, the more you focus on something and practice it, the better you get.

Fast forward to a month ago.  Linda’s company was hosting a “make your own commercial” contest that we really wanted to enter.  It was going to take a lot of planning (and preparing) to make it happen.  Writing n

ew lyrics for a song, story boarding the video shots, scheduling the actors and filming the shots, getting a copy of the song and lyrics to the vocalist so he could rehearse, then scheduling a time to record his tracks and mix it with the music… all this with enough time left over to edit the video and get it in the mail.

I think we both realized that we wer

e going to have to step outside our comfort zones and really make an effort to plan this and get things in motion if we were going to get it done.  I’m proud to say that many reminders back and forth created some positive forward movement, and this past Monday we plopped the DVD in the mail for the judging.

It feels really good to have accomplished that knowing that we could have very easily missed an opportunity because of a lack of planning.  As many of have said – Failures don’t plan to fail, they fail to plan.  Giddy-up.

So here is a quick exersize for you if you find you are in the same boat as Linda and I:

Take 30 seconds to write down 5 things you would like to get done this week.

Have you got a list?  Good!  Now take another 30 seconds to decide WHEN you are going to do each of those things.  You now have a plan.  Of course your plan is only as good as the actions it creates.   Ultimately we make plans so we can get stuff done.

Plan to get results, and you will!