About a year ago, my wife Linda and I got a tandem bike.  We love to go tooling around the neighborhood in the evenings and we typically get waves and cheers from the people we pass by.  I think it’s been a long time since they have seen people on a tandem bike, and they are probably impressed that we are not fighting.

Riding a tandem bike takes trust, teamwork, and patience.  Communication is also high on the list because while I may see a bump coming up, Linda’s view is blocked by back and head, so I learned quickly to call out the upcoming obstacles.

One area where there has been some confusion is around the kickstand.  I think it’s because we both had expectations about how this particular function should be handled, but neither of us thought WE were the ones handling it! It wasn’t until we heard it scraping along the road that we knew someone had missed something.

Here’s where the expectations come in, and I think they are both legit.

Linda’s expectation was based responsibility.  I take care of the bike.  I do the “pre-flight checks” to make sure it’s ready to go and bring it around front when it’s time to ride.  Naturally, putting up the kickstand would be part of that routine.

My expectation was based on location.  Linda rides in the back, which is where the kickstand is.  When I ride my non-tandem bike alone, I usually get on the bike and as I push off, I kick up the kickstand with my foot.  Only natural to think that would happen here with whoever was closest to the kickstand.

Here’s the trouble (and the link to leadership in case you were wondering) – we both had differing expectations that we didn’t discuss prior to taking off for a ride.  Only when something went wrong did we finally divulge that indeed we thought the other person should have done it.  How many misunderstandings have happened in the world – in YOUR world – where you thought expectations were clear when they really weren’t?

In my experience, many of the behavioral issues leaders experience stem from unclear or non-existent expectations. A common first step to getting a team or individual back on track to establish, or re-establish the expected behaviors and outcomes.

If you take the attitude that you can’t over-communicate your expectations, you’ll probably find that you sound like a broken record to yourself (because you are hearing it all the time), but also that your teams finally have a better understanding of truly what they are supposed to be doing.

In case you were wondering, we will both be checking the kickstand next time.

And Oh! how I know this to be true.  Humans make mistakes.  I am human.

On August 5, I posted a piece called “All the kids are doing it”.  I was quite proud of the content and was excited to see what you all might think of it.  I am pleased to say I received a number of very positive responses.

Ashley Adams from Dollywood was one such contributor.  What also struck me as encouraging was her note AFTER telling me how much she liked the message of the post.  Here is what she wrote:

…a couple more things.  I hope this doesn’t offend you, but if I was writing a blog for so many others, I would want

someone to tell me.  I am not even sure if you can go in and edit, but at the beginning of the fifth paragraph, you have “Image” instead of I guess, “Imagine” and in the sixth paragraph, in the parentheses, it should be “deflecting” instead of “delfecting.”

If you can’t change it, it just shows us you are human too!

Personally, I SO appreciated that Ashley took the time to point these things out to me.  It will make me more careful as I proofread my work in the future.  (That doesn’t mean I won’t make mistakes, but I’ll be more careful about it!)

There are two things Ashley wrote that really intrigue me – I’ll start with the second one first.  In her last line she mentions being human.  As I talk to more an more people, being able to admit a mistake and “being human” are two things that go together like peanut butter and jelly.  The funny thing is that many leaders are afraid to admit a mistake because they feel it will undermine their credibility.  99.9% of the people I’ve spoken to say that the opposite is true – the trust level actually goes UP when someone can admit a mistake.  Hmmm…

The second (or first – depending on how you look at it) thing that struck me was how she prefaced the feedback.  “I hope this doesn’t offend you”.  I know exactly where that came from… so often we give feedback and immediately the other person gets defensive and offended.  If we look more closely at the feedback itself, you will notice that she states facts, and gives me a reason why she is giving the feedback.  To me, I took it in the spirit of her trying to make me a better writer.

Too often our feedback is lined with judgments and assumptions that almost beg the other person to get defensive.  Ashley never said I was a bad writer or that I lacked attention to detail or that I had a bad attitude.  Had she done that instead of focusing on indisputable facts, this might be a very different post. :o)

This struck me as odd, and it made me think of my friend Scott Brown from Ohio.  Not because he is odd, but because he is on a crusade to raise the bar on customer service.

Take a look at this sign that is posted on the front door of a popular office supply store.  (I apologize for the bad quality, I’m still learning the new camera zoom app for the iPhone!). 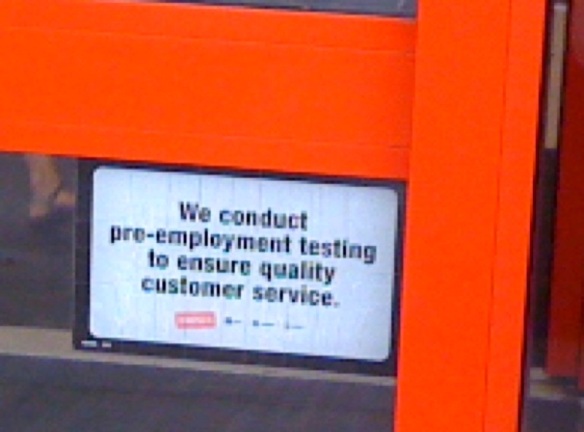 Just in case you can’t make it out, it says, “We conduct pre-employment testing to ensure quality customer service”.

I will tell you that it made me think about the customer service I was about to receive.  It put me in the mindset that I would get good service here, and that the company is committed to it.  I then thought about the expectation that at some places (based on experience or reputation) that you will receive bad service.  Maybe we all just get the kind of service we THINK we’re going to get.

How often have we been in a hurry, annoyed by something, and the service we then got was slow and useless?  Contrast that with when you are feeling good, its a good hair day, and suddenly the service you get improves.

To me this sign is more about the sub-conscience thought of the customers than the service itself.  It reminds me of people who put up security signs in their yard even though they don’t have a security system.  Makes you think a little differently before you go in, if you go in at all.

Phil Rommel is the Park Operations Training/Audit and Park Services Manager at Valleyfair Amusement Park in Shakopee, MN.  Phil is wondering about making training sessions more fun – which I think is a necessity in our line of work.  Of course we have to balance fun with actually learning something.  Click here to read more…

This time the honor goes to Randy Hutchinson from Valleyfair in Shakopee, MN.  He correctly identified the picture below as Santa Cruz Beach Boardwalk in Santa Cruz, CA.

Funny story… I picked this picture for a previous post because I really liked it.  To me it epitomized ‘summer fun’.  I wasn’t sure which park it was, but it appealed to my love of amusement parks as well as the beach.

A few weeks ago I got a call from Ken Whiting from Whiting’s Foods. He wanted to bounce some ideas around about training and we got to talking about the blog.  After our phone call, I got an email from Ken letting me know that the picture was from the Santa Cruz Beach Boardwalk – where he works!  Too cool!

I am delighted to say that a number of people correctly identified the picture in the previous post as the 7 mile bridge connecting mainland Florida and the Florida Keys.

However, there can only be one winner of the 1000 Bonus Points.  The person, who correctly identified this bridge at 8:03 am EST is…. drum roll, please… Cory Hutchinson from Funtown Splashtown USA in Saco, ME!  Congratulations, Cory!  Redeem those points wisely.

Maurice Heller (my Dad – no special favors or information exchanged!)

If you are upset about missing out on the 1000 BonusPoints, fear not!  Here’s another chance to increase your score: In this post from July 10, I included a picture of a beach-front amusement park.  For 1000 points, what park is it?

So I finally joined Facebook, but not because “all the kids are doing it”.  I joined for a legitimate business purpose (almost said that with a straight face).  But seriously, I am embarking on a long distance training experiment, and Facebook will be a major player in our communication.

For the longest time, I have actually been staying away from Facebook, almost in the name of rebellion.  Because everyone was doing it and wanting me to do it, I was choosing not to.  I spend enough time in front of a computer, and I saw this as one more excuse to spend even more – and I wasn’t having it!

Now that I am on it, I do see some benefits.  Okay, so its cool to see what people are up to and I have been able to catch up with some old friends.  I’ve also noticed some people have too much time on their hands – but that’s another story.

The story I wanted to spin today was about peer pressure, which I think gets a bad rap.  How many of us can hear our

parents saying, “If little Johnny was going to jump off a bridge, would you do that, too?”  Typically the pressure to be cool or to fit in causes people to do things they normally wouldn’t do, sometimes against their better judgment.  But what if its a good thing the team is doing?  Doesn’t peer pressure work both ways?

Imagine you have a team of 15 people.  Out of those 15 people, you have 12 that are hard workers, they smile, have fun and treat your guests (and fellow team members) with respect.  Unfortunately, many times our efforts and energies are spent giving negative attention to the 3 peeps who aren’t pulling their weight.

What if that were reversed?  What if we spent more time praising, coaching, and applauding the 12 who are doing well?  Remember that most of what we do as humans is about getting (or deflecting) attention.  Its a self-esteem thing.  And, when people don’t get enough positive attention, what do they do?  You guessed it… create some drama or a situation to get negative attention.  At least its attention.

PS – The first person who can correctly identify the bridge in the picture above gets 1000 bonus points.  (Points toward what, I’m not sure.)