This particular episode was originally released in 2008, so I had heard of many of these contraptions, but many I had still not ridden.  So, I perched my feet up to enjoy the ride.

About 1/2 way through (more or less) there was one particular ride that riders had to weigh in for to make sure they had the right harness.  The attendant very proudly showed the camera what they used for a checklist.  This is literally a screen shot of what was shown. 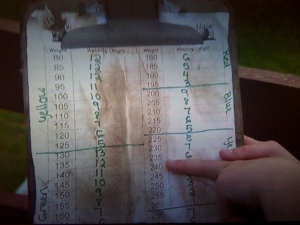 Now, I have filled out my share of checklists in the past, and I have certainly seen the effects that living outside can have on a stack of papers and a clipboard.  My observation here is this: is this really how you want your facility portrayed on TV, or at all?

Most of us know that the perception of safety is largely determined by what we see and experience.  Notice I didn’t say reality… there was a study done once in the airline industry regarding why passengers didn’t fly on a particular airline more than once.  The surveyors expected to hear things like it was the schedule, price, even rude employees.  Overwhelmingly, though, the top reasons were things like coffee stains on the tray tables or trash left in the seat pocket.  People are equating the cleanliness and upkeep of the cabin with the safety of the aircraft.

Do people do this in our parks?  You bet.

So it may be time to double check your checklists, or other things that can give off the perception that you don’t pay attention to the details.

As a sad and sobering footnote to this story, there was a fatality in 2010 at the park with the messy checklists above.  Unfortunately, it was an operator not paying attention to the details that ultimately caused the accident.

Give me your two cents! Cancel reply

This site uses Akismet to reduce spam. Learn how your comment data is processed.