Peace on Earth, good will toward men.

‘Tis the season to be jolly.

Be nice to your sister, it’s Christmas!

It never fails.  When we get to “the holidays” time year, there is palpable feeling in the air of hope, good will, family togetherness and kindness for those less fortunate.  “It’s the most wonderful time of the year”, states one classic song, and most everyone buys into it.

But why?  Why at this time of year do we all of a sudden turn on the compassion and caring and treat our neighbors (and even foes) with the respect and dignity they deserve?

It could be tradition, a time of celebration, or the desire to not end up on Santa’s naughty list… to me it doesn’t matter why we do it for a month in December, so much as it matters why we don’t do it the rest of the year.  Whatever the reason, we choose to act differently.  In many cases, we choose to give.

From a leadership point of view, this is a huge opportunity.  If you notice that people are a little more kind and cooperative around the holidays because more people are in a giving mood (including you), then why wouldn’t they react that way the rest of the year?

So what are we giving (beyond the obvious tangible “things”) that people are responding to?

Walt Disney said it best, “You can design and create and build the most wonderful place in the world. But it takes people to make the dream a reality.”

And it takes time, patience and understanding to keep the people around you feeling like they want to give you their best effort.

In early 1900’s, Trolley Parks were all the rage in the United States.  If you don’t know what a Trolley Park is, it’s a recreation park that was developed at the end of a trolley spur in a city or town to encourage ridership on the weekends – in essence giving people a reason to ride the cars (and spend money) on Saturday and Sunday.  Those small parks were often near lakes, and eventually grew up to become full-fledged amusement parks.  I am proud to say I started my career at one such park in New Hampshire, Canobie Lake Park.

Unfortunately due to that pesky invention, the automobile, people did not need to rely on trolleys as much for transportation, and the decline of the Trolley Parks began. 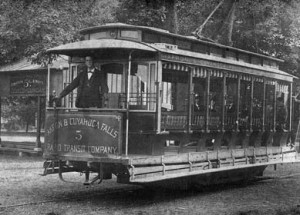 Other economic factors were at play as well, and today only a handful survive.

Something occurred to me the other day, though, that got me thinking that there is a new generation of trolley parks popping up all over the country.

They are called FEC’s.  Family Entertainment Centers. Some as quaint as an arcade and ice cream parlor, others as grand as mini-golf, go-karts, rides, games, restaurants, water slides… some are getting so big they are redefining the category of FEC.  They are really small amusement parks.

Which tells me this: the market for a close-to-home, moderately priced attraction did not die with the Trolley Parks – it just went away for awhile.  But now it seems to be back with a vengeance.  With more and more “stay-cations” happening these days, a trip to the local FEC could be the perfect answer for an afternoon of merriment.

Of course the challenge for FEC operators is to ensure that their businesses do not fall out of favor like their predecessors.  One significant advantage some of them have is that at least a portion of their attraction can be operated year round, even in colder climates.

So will FEC’s take the place of Trolley Parks?  Have they already?  What do you think?

For many people, visiting a Disney park or property has a magical quality. Because of this, just as many companies around the world have been trying to emulate the Disney experience in their own facility, attempting to tap into their own brand of magic. But here’s the problem: there is no such thing as magic.

As much as I wish it weren’t true, I cannot wave a wand or snap my fingers and transport myself to Hawaii anytime I would like.

Except for magicians, most people can’t explain how a magic trick works (and magicians really aren’t supposed to tell, either). We know there has to some logical explanation about the lady that gets cut in half, but we are too busy being entertained to really question it. That’s what Disney is counting on for the guest experience, and what makes emulating them so difficult.

So I say don’t bother. Especially when there is a little park in Indiana that has been named the friendliest park in the world 13 times, positioning themselves as the new gold standard for hospitality in the hospitality industry.

And here’s what’s cool. If you were at the Pat Koch Lunch and Learn at IAAPA, she told you exactly how Holiday World has done it. If you weren’t, I’ll recap a few points here.

1.  They train. They commit to making sure everyone knows what they are supposed to do and has the skill to do it. Even as Mrs. Koch says, “it takes time and it’s expensive, but it is vital.”  And it’s not just for the front line, either.  Folks in management ranks are also required to keep up with industry trends and certifications.

Speaking of training, it was something she said about the timing of their training that was very intriguing as well. She said they let people get comfortable their tasks for a little while, then bring them back in for hospitality training. That way they aren’t trying to cover too much at once.  Seems to be working. :o)

2. They have “high standards and strict rules”. Many people seem to think that young folks need to be coddled or they have no work ethic. Not so. Holiday World proves that you can have high standards and people will rise up and meet them IF you are clear about the expectations and you enforce them fairly and consistently.

3. They “mentor, teach and care for” their employees. People need to know how they measure up to the standards, that they belong, and that there is someone looking out for them.  As a brief aside, my wife and I have been watching the show “Gold Rush” about the new gold boom in Alaska.  One of the characters, 16 year-old Parker Schnabel, recently enlisted the help of his father and grandfather to build a road on his claim.  Parker shows a tremendous amount of respect for these two, not just because they are good at what they do, but likely because they have been there to encourage, guide, mentor and care for Parker throughout his life.  Our employees at work need that, too.

4. They listen to the front line. Mrs. Koch stated that, “maybe the cashier or sweeper has a better idea of how things should be than we do.” It takes a strong leadership team to admit they don’t know everything, and that the people in the trenches probably have some good ideas, too. We just have to listen to them.

There was one last thing that Mrs. Koch said in her presentation that stuck with me, something that applies to business, relationships and how you lead your teams. She said, “Be number 1 to somebody, not number 2 to everyone.”

To me that means be the best you can for YOUR audience (ie. clients, guests, employees, friends, family, co-workers). Don’t worry about being everything to everyone.

Who are you number 1 to?