This past Sunday was my first visit to a place in Hendersonville, NC called The Dugout.  My friend Brad and I went there to have some lunch and catch the Patriots game. Little did I know that I would be blown away by the actions of one of the employees.

As you might have guessed from the name, the Dugout is a sports bar.  Lots of TV’s, sports memorabilia on the walls and plenty of “pub grub” on the menu.  When our server, Josh, told us that everything they make is fresh and homemade, I was excited to try to the food.

And it was good. I had the fried green tomato and shrimp BLT.  Yum.

But that’s not the “blown away” part.

At about half time in the game, I asked Josh what they had for dessert.  The only thing they had that day, he said, was a sugar (or gluten – I can’t remember now) free pumpkin pie cheesecake.  I am a sucker for pumpkin pie AND cheesecake, so you put them together…

When I ordered, Josh asked if I would like whipped cream.  Um, of course!

He brought the slice over a few minutes later and informed me that they were out of whipped cream, so….

(Get ready to be blown away…)

He said he would make some!  And he did.

A few minutes later he came back with a small bowl of fresh (and REAL) whipped cream.  He had literally put some cream in a bowl and whipped it.

I’ve made whipped cream before – it’s not that hard.  BUT, for a server at a sports bar to whip up some whipped cream was totally unexpected.  Yes, I was blown away.

My friend Scott Brown is always asking his clients, “what can you do to ‘plus’ your service?”  In other words, Josh could have delivered the cheesecake and apologized for not having the whipped cream. Okay, they are out, oh well. The “plus” was taking the initiative and putting his know-how to work in the absence of a product or promise that had been made.

Because we were at the Dugout for so long (it was a long game!), I was able to glean a little intel into the perfect storm that allowed this to happen.

My friend Brad said that the owner is usually out and about, very visible in the restaurant, which is fantastic.  Today was a little different and toward the end of the game we found out why.

The owner came out (in a Patriots shirt, I might add!) and was conversing with some of the regulars.  He said that one employee called out today and another didn’t show up, so he had been helping out in the kitchen to make sure everything ran smoothly.

I remember back to leaders I knew that jumped in and helped when the chips were down and what a positive impact it had on the team.  There was a can-do, we’re-all-in-it-together kind of spirit. And even though it may not be the best situation, good leaders can turn it around quickly.

Getting back to Josh, if he didn’t KNOW how to make whipped cream, I would have enjoyed the cheesecake anyway.  BUT, with the owner setting the “do-whatever-it-takes” example, Josh probably felt like he could take it upon himself to do what he needed to do to make things right.

The stars had aligned… the perfect conditions were present for just the right synapse to fire in Josh’s brain, connecting what he knows HOW to do with what he COULD do.

But here’s the thing… this is not intended to be a lesson in teaching your employees how to make whipped cream.  That may not be your business and it might not make sense.

Instead, we should always be focusing on developing the skills and can-do attitude in our employees so they can read a situation and administer a positive solution.  So much of “customer service” training has devolved into order taking and completing tasks.  Probably because we don’t think our employees can handle anything else.  But that’s wrong.

That is us taking a short cut.

You want to stand out in customer service?  You want to provide cool and unexpected experiences for your guests?  You can’t script that.  You can’t put people in a box and then expect them to perform out-of-the-box feats of super-ness.

By the way, when was the last time you did something unexpected (and positive!) for your employees?

If I was blown away with positivity and good vibes as a guest, imagine what kind of impact you could have on your staff.

About the author: After 20+ years in hospitality leadership and human resources, Matt Heller founded Performance Optimist Consulting in 2011 with one simple goal: Help Leaders Lead. Matt now works with organizations large and small to help them improve leadership competencies, customer service, employee motivation and teamwork. His book, “The Myth of Employee Burnout” addresses how leaders can overcome the all-too common phenomenon of employees burning out, or losing motivation over time. 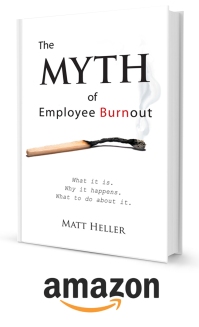 So this just happened…. I took my VW Beetle in to get the door handle fixed.

As it happened, my car had two door handles needing repair.  On the drivers’ side, the handle that you use to pull the door shut was loose. Didn’t really care about that one.

The larger priority in my mind was the passenger door… the handle that you pull to OPEN the door was inoperable, meaning that the passenger (usually my wife) had to either roll the window down and open it from the outside or wait for me to come around and open it for her.  She was NOT doing a Dukes of Hazzard maneuver.

So, I made an appointment to get the door handle fixed. I went to the shop, gave them my keys and they went to work. It wasn’t until I got back into my car that I noticed something was amiss.

There was painters (blue) tape on the drivers side handle.  I thought… “oh, they noticed that and fixed that, too!  Sweet!”  (Not with painters tape, that was just holding it while the silicone cured).  Then I reached over and tried to open the passenger door.  Nothing doing.

I went back in to the shop and talked to the mechanic.  Apparently there was a miscommunication.  Hmmm… how did that happen?

Let’s look.  Re-read the parts where I talk about getting the door handle fixed.  I did it twice in this post.  Neither time did I mention that it was the passenger door.

It’s QUITE possible I didn’t mention it to the mechanic, either.  I honestly can’t remember. In my mind, the door handle that NEEDED to be fixed was the passenger side.  However, if they never got in or out of the passengers side, they wouldn’t have noticed it.  They noticed the drivers side and that was that.  That’s the one they were going to fix.

Part of the customer service “discovery” process is to MAKE SURE you know precisely what it is that the customer is looking for.  In this case, a clarifying question about which door handle needed attention would have saved us both some time.

But here’s the thing.  I’m not mad about this.  Not even a little angry.  So not angry or upset that I will still RECOMMEND this shop and will go back whenever my Beetle needs attention beyond my skill set (and not just to fix the other door handle!).  And why… because of the way they treated me and the way the mix up was handled.

Here is what I mean:

And I am sure they will make it right.  So many of my experiences with this shop have been right, that it over powers this one that was not-so-right (especially when I probably contributed to this). And that is why I will be back.

What about you?  Is your service so good, and the way you treat your guests so genuine and exceptional that they will overlook little (or even medium-sized) missteps?   Do they give you the benefit-of-the-doubt if something isn’t quite up to expectations?

If you treat people like the fine folks at Eurotechnik in Hendersonville, NC treated me, (and be sure to ask clarifying questions!), they will.

About the author:  After 20+ years in hospitality leadership and human resources, Matt Heller founded Performance Optimist Consulting in 2011 with one simple goal: Help Leaders Lead. Matt is now in high demand with organizations large and small to help them improve leadership competencies, customer service, employee motivation and teamwork. His book, “The Myth of Employee Burnout” addresses how leaders can overcome the all-too common phenomenon of employees burning out, or losing motivation over time.