A few weeks ago, Dino Fazio from Morey’s Piers told me that opening day for him was just 5 weeks away.  Since they open on April 4, you can see that I am a little behind in typing this post.  But I digress…

Dino’s proclamation made me think of a couple of things.

1.  Marty Moose.  That poor animated moose that greets the Griswolds at Walley World. All he was trying to do was tell his guests that Walley World was “closed for two weeks to clean and repair America’s favorite family fun-park.”  As we 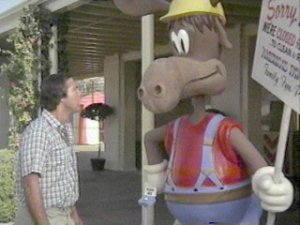 2.  Dino’s comment also reminded me of when I worked at seasonal parks, and how much I actually missed the excitement and craziness of getting ready to open for the season (and each day) and the bittersweet feeling when the last guest left at the end of the season.  We get a little of that from season to season at a year-round park, but it’s really not the same.

3.  Lastly, I started thinking about what I would do differently if I were to go back to a seasonal park.  Knowing what I know now, I would most certainly change the way I went about training my team members.  I used to try to get them as much information as possible up front, set them loose and hope for the best.  We did some cross-training on different areas as the season went along, but rarely did we have (or make) the time to continue with additional skill building around service or even leadership.

I think if I had it to do all over again, I would set aside some time over the winter to develop quick-hit training/informational sessions that could be delivered in small increments throughout the season.  A quick role play here, a scenario or concept to think through there… nothing fancy or too involved, but enough to keep people focused on the big picture.

This is not to say that you hold back information that is vital to their early survival with you.  Instead, you give them chunks of information they can digest and APPLY easily, so they can build on that in the future.

Some of you may be way ahead of me in coming to this realization.  I wanted to thank Dino for making me think about this so I could realize it, too!

I’ll admit it – I have Hawaii on the brain.  On Sunday, my wife and I will embark on a 7 day journey of Aloha, Mahalo, Melikilikimaka, and other words with far too many vowels.  To say we are excited is an understatement.

Of course, the mention of Hawaii was not an effort to ‘rub it in’ to my friends in colder climates, but rather to discuss

rewards and recognition.  This trip is actually made possible by my wife’s company, Stampin’ Up!.  Each year, Stampin’ Up! hosts a trip to reward the top performers in the company and this year, we’re off to the Big Island (literally).  Its quite an honor to earn the right to take this trip, and it’s certainly a nice payoff for a full year of hard work.

Most companies, especially in our current economy, are not in a position to provide such extravagant rewards for their employees.  However, that doesn’t mean that the rewards we provide for good behavior or meeting a goal can’t be meaningful.  In fact, they HAVE to be.  Otherwise, why would anyone reach for it?

Throughout the year, my wife would say, “we’re doing this for Hawaii” or “this is going to help get us to Hawaii”.  She had clear goals to accomplish, and she knew what would happen if she achieved it.

So even if a trip to a tropical paradise isn’t in the budget, we can learn something from this concept.  When thinking about what and how to reward your employees, consider these two points:

PS – Have you been the recipient of a meaningful reward?  I’d love to hear about it if you’d care to share.

On Friday, March 20, at 2 p.m. EDT, attorney Theresa Gallion, of Fisher & Phillips, LLP, Tampa/Orlando, FL, will lead a webinar about recently implemented changes in the Family and Medical Leave Act (FMLA) and the ADA Amendments Act, and the effect of these new Human Resources laws.

The ADA Amendments Act took effect January 1, 2009. The law overturns a series of Supreme Court Cases, expanding the number of workers who are considered disabled under the ADA and increasing the number of employers that must make reasonable accommodations for these employees.

The FMLA revisions took effect January 16, 2009. Under the FMLA, employers with 50 or more employees are required to provide up to 12 weeks of unpaid leave for a serious health condition or to care for certain covered family member with a serious health condition. The new FMLA rules clarify both employer and employee obligations regarding notification and medical certifications.

Ms. Gallion will provide an overview of the significant changes to the regulations and the steps that you need to take towards compliance. She will offer specific guidance for small businesses under 50 employees.

At the end of the webinar, there will be an opportunity for participants to ask questions about FMLA and ADA Amendments Act and their impact on the attractions industry.

Although this event is FREE to IAAPA members, pre-registration is required. For more information on the new requirements, please visit our blog. If you have additional questions about webinar registration or about how you can participate, please contact Linda Gerson.

What is a Webinar?

Each year, IAAPA hosts various “webinars,” or live online educational sessions. With this e-Learning option, you will be able to watch and listen to industry leaders give presentations in real time. Current technology will enable you to view the speaker’s computer screen on your own computer and there will be opportunities for you to interact with the speaker and ask questions using your keyboard, phone, or a computer microphone.

IAAPA uses GoToWebinar to host these sessions. You may be required to register in advance and download a small applet which will enable you to view the webinar presentation. In some cases, you many need to check with your IT administrator to ensure that you can download this applet prior to the session.

Note: Long distance toll charges may apply if you opt to participate in the webinar via telephone. There is no charge to participate if you use the audio system of your computer.

Ashley from Dollywood had a few follow-up questions regarding using stories and getting to know your presentation.  I have posted my ramblings on the subject on the “Got a Question” page.