This BLACK FRIDAY special benefits YOU, your EMPLOYEES and your GUESTS! 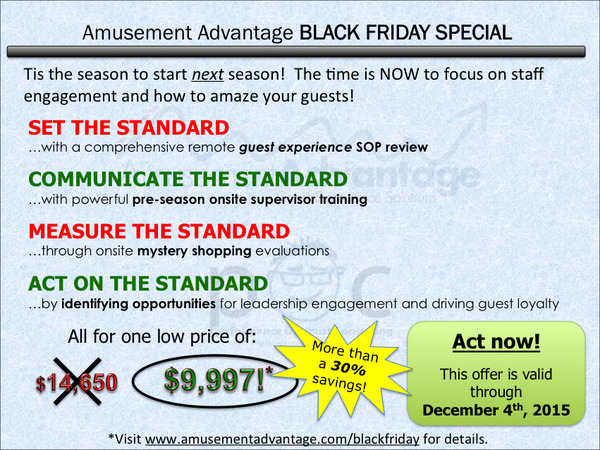 Performance Optimist Consulting and Amusement Advantage are strategic
business partners who combine forces to help attractions around the world
engage their employees, amaze their guests and improve business processes.

I love the conversations that occurulate at the IAAPA Attractions Expo! This one in particular was with a client who was having trouble communicating with another employee.

The client (we’ll call her Lisa) was having trouble getting through to an employee (we’ll call him Al) who was tasked with fixing things around the facility as they broke or became unusable or unsafe.

According to Lisa, Al has been at the facility for 40 years, and has gotten a little curmudgeony.

In one particular case, Lisa had been asking Al for a printout of all of the work he had completed. Lisa is not Al’s boss, but she wanted that information because these tasks had been called in by her staff, and she wanted to be able to show that management was listening and taking care of their concerns.

Unfortunately, Al was less than forthcoming about providing that information.  He had all sorts of excuses why he couldn’t, or why Lisa wouldn’t actually want it.  In the end, it became a source of contention between the two, and now Lisa admits to not even talking to Al unless something needs to be fixed, and it’s usually an urgent (and tense) situation.

In fact, this all came about because Lisa was wondering what to tell her employees about the work being done. She was really at a loss.

But that’s not the real issue.  The issue is the relationship between Al and Lisa.

I asked if there were any situations where they actually did get along or that Al was cooperative.  “Yes”, Lisa said. “When talking about the safety and security of the facility, Al is all on board.”

We then went on to talk about the fact that Al had been there for a while, probably had his share of “baggage”, and (as anyone would) was possibly burned out on ONLY being spoken to or approached when things were broken, or he was being asked to jump through hoops to fix something right away that didn’t line up with his priorities.

Lisa concurred this was likely.

So, since we can’t MAKE Al just be more productive and cooperative, we have to change the story around this situation.  That challenge falls squarely on Lisa’s shoulders.  Here is what I challenged Lisa to do to “befriend the curmudgeon”:

If you have a curmudgeon, or someone you avoid, or one of those “well, that’s just the way they are” employees, you may… no you WILL need to take the first step to fix the relationship so that you can both move forward.

For Al and Lisa, this is a work in progress and I am very excited to hear how things go when Lisa gets back to her facility.  This will not be a quick fix, and Lisa knows that it will take some patience and persistence to make this work. Hopefully I can share a positive progress report with all of you in the near future.

Available at the IAAPA bookstore (or Amazon if you want the Kindle version)!!

Here it is… episode #2 of 3 Questions! My guest for this episode is Josh Liebman, Director of Business Development for Amusement Advantage.

In this episode we talked about careers (both chosen and not), fried cheese on a stick, and the importance of networking (and how to do it right)!

If you have more questions for Josh, he can be reached at josh@amusementadvantage.com or 407-442-3110.

I’m so excited! The IAAPA Attractions Expo will be upon us in a few short weeks and it’s shaping up to (again) be the most wonderful time of the year!

This year, one of the educational programs I am working on is called “HR NOW – The Frontline Speaks: Insights From The People Who Are Truly Running Your Business.”  In this session, we’ll hear what frontline employees from around the world think about technology, leadership, motivation and more. This is your chance to hear directly from the people who are serving your guests!

We’ll have 3 frontline employees from various attractions as our panelists in the room, and we have also gathered video footage of frontline employees from parks around the world answering the same questions we’ll be asking our in-room panelists.  During the session we will play some of those clips in addition to hearing directly from the panel.  You won’t want to miss this!

Now back to our title… in reviewing the video submissions that came in, an interesting trend emerged.  When talking about what motivated people, or what would even cause people to leave, many answers were different sides of the same coin.

And that coin is… CHALLENGE.

One employee said it was very motivating when their supervisor assigned them more complex tasks, and another said he would leave if there were no more challenge to the job.

Yet another spoke at length about how he had left his park for another job… a 9 to 5, weekends off, low-stress kind of job, but it didn’t last.  He craved the excitement, variety, and yes, challenge of his old job.  He found it by going BACK to the park.

I first heard T. Scott Gross say this during an education session at IAAPA back in 1997… “The only people who want to do idiot-proof jobs are idiots.”  I think it was true then, and it’s even more true today.  We can’t expect our employees (especially young employees) to be satisfied with same-old, same-old, hum-drum jobs where all of the challenge and decision making were removed to make sure no one made a mistake.  People don’t work that way… at least not the good ones, and those are the ones you want!

I can’t wait to gather this panel and see what other great insights they will provide! Below are the session details if you are going to be at the IAAPA Expo in Orlando.

Hope to see you all there!!